I really cannot blame my mother too much for her disdain of mandatory family gatherings. The same people who scorned and ridiculed her when she first met them now wished to embrace her, three times a year, with hypocritical open arms and unctuous salutations. For over fifteen years we were expected to rotate three major holidays to be hosted at one of three houses. Christmas was at Aunt Rose’s, New Years was at Aunt Kay’s, and Easter was at our house. Thanksgiving did not count for some reason other than the fact that four holidays cannot be evenly divided by three families, leaving me on that day each year to profusely thank Uncle Mike for having moved to California.

How these holidays were selected and how the lottery fell to determine whose house and on which of the days I will never know, but it was cast in stone that this schedule was immutable.

The menus and routines were also immutable.

On Christmas my grandmother made cheese ravioli. They were gigantic, exquisitely tasteful and had individually varied kaleidoscopic shapes. I still have the original recipe and make them on a rare occasion; but I dare you to try it for yourself to understand why we only had them once a year. Making ravioli falls into the general category of; “It seemed like a good idea at the time.”

Without fail Chicken and salad always followed this first course.

Since my preference would have been stay at home all day playing with my Christmas presents, the post-meal, pre-desert adult bull-shitting break seemed interminable. By that time it was usually dark outside and I was bored beyond belief.

Finally, associated with a great fanfare entrance from the kitchen, and all the dining room lights turned off, Aunt Rose would march in with a snow white cake covered in white frosting, sprinkled with stale coconut slivers, a single white candle lit on top, and would then proceed to lead the family in a hearty rendition of singing happy birthday to ‘Baby Jesus.’ It was nauseating and insipidly stupid. Although to be absent from this ceremony was to commit family blasphemy, the whole scene presented a great conundrum, as to my knowledge one does not get the cake, the song, or a single candle on ones actual birth date. Nor could I reconcile the fact that by my count this anniversary really called for a much bigger cake to accommodate the necessary candles or that helping to light and then blow out 1959 of them would have finally made it worth spending the entire day there.

To make matters worse, I happen to hate coconut, would try to pick each flake off the frosting in a process that created a gooey mess which then prompted a few unsolicited but predictable annual comments from Aunt Rose.

The next step in logic, which might be to serve a chocolate one too was obviously beyond anyone’s imaginative reach. Either that or it would undoubtedly conjure up some crude bigoted comment blaspheming Jesus by an implication he might have actually been a black man.

The only other possibility for desert then was a bowl of fruit  with over ripened brown bananas, pulpy apples, last years chestnuts and soggy grapes or some chocolates with unpredictable and sometimes inedible interiors. Because the house rule was that you were obligated to eat the candy you picked or you could not have another one, we kids usually palmed the ones with the nasty surprises inside and tossed them outside in the next-door neighbor’s yard.

One of the most poignant things I remember about Rose’s house was the full size oil portrait of herself over the fireplace mantle, wearing a crimson red dress.  But I only fixated on the large black facial mole because the hair growing out of the mole had been omitted by artistic flattering license. This made the painting a hypocritical showcase centerpiece and a subtle declarative monument to who really wore the pants in the family. Actually because of her stump legs that failed to taper to ankles, she would have looked much better in pants.

True to form, she had a litany of “house rules” creating a paranoia in which I truly believed that the eyes on that painting could see what anyone; anywhere in the house was doing. The very fact of being in her house gave me the creepy feeling that I was in an oversized birdcage replete with hidden surveillance cameras.

Uncle Ed, who was married to Rose, was a very humorous, congenial, easy going laid back person. He was a pleasure to be around, was naturally funny and had a knack for making everyone laugh; and an odd polar opposite to his wife.

He once sent my mother a homemade birthday card with a cameo headshot of himself on the inside panel, and crayoned angelic starbursts radiating out around his beaming face. It simply said: ‘Happy Birthday: From Me.’

Eddy loved fresh water fishing, deer hunting with bow and arrow, and was an avid coin collector in the days when rarities still existed in pocket change.

The long standing family joke about him never having actually bagged a deer was quieted the day he did a surprise drive-by on the way home from upstate and after plopping the carcass onto our front lawn tried to hack some venison off the butt end of buck he had shot. My mother, who secretly abhorred the thought of roasted venison, politely declined the offer by lying about the fact that there was not enough room in the freezer. But then again she also said the same thing when I tried to put my fishing bait in there; always harping tirelessly about its smell until it was finally used up. Freezer excuses and freezer rules.

Since Eddy worked for the New York State Throughway Department, he could unpredictably get called out on Christmas Day to plow snow someplace in upstate New York with exotic sounding names like Saugerties Although everyone bemoaned this fact and pitied “poor Uncle Eddy who had his Christmas ruined”, for some equally strange reason Uncle Eddy himself never seemed to be too upset at having to leave, even hinting at a bit of cheer instead as he bounded out the front door saying: “Merry Christmas everybody.”

Later in life when I had to carry a beeper on holidays, I too would come to appreciate the saving grace of being paged out from onerous obligatory social functions which made having to work, by relative values, seem to be infinitely better than mandatory fun with insipidly boring relatives or the tedious ennui of a cocktail party.

My cousin Jimmy and I preferred our own fantasy about Uncle Eddy, that after a few hours of plowing snow off the Thruway, he was  hanging out with his road crew; maybe playing cards or possibly pulling a break at some road-side diner. He would probably be happy to have escaped for the holiday and was perhaps even enjoying a nice piece of chocolate fudge cake for an unusually welcome change on Christmas Day. 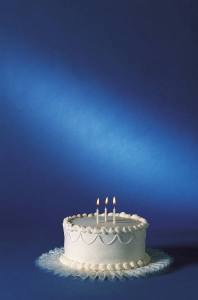