For every action, there is an equal and opposite reaction.

Opposite the desk in my consultation room were two Brewer chairs available for patient seating. These are comfortable metal-framed chairs with caned seats.

One day a new patient arrived with her son for a first office visit. She weighed about four hundred pounds and could barely squash herself into the seat. Then about half-way through the interview the chair collapsed underneath her and cantilevered itself so that it pinched her into the frame. She looked like a flipped over turtle with its legs flapping helplessly in the air, wholly unable to right itself. The woman was continuously screeching and with her doting son uselessly petted her head, the commotion caused enough ruckus to demand the concerned attention of my staff and other patients the waiting room. I probably could have used a set of the Jaws of Life as I struggled to extract her, but all I had in the office was a useless pair of pliers.

Once she was liberated I managed to pull the chair back into shape, leaving the remainder of the visit to be relatively awkward, tense and terse. Luckily there was no subsequent litigation, but as I recall, she and her son were visibly irritated; and she never came back for a follow up visit.

She was the last patient before lunch.

The next patient after lunch was a well-established patient who also happened to be a personal friend.

Dudley, a man in his seventies was a very wealthy Blue Blooded, in the Blue Book WASP. He had made a fortune in both Inheritance and Investment Banking; had retired at a very young age, owned a house in the dunes of Amagansett on the ocean and another house on the water in the Bahamas. His marriage to a Sugar Import heiress didn’t hurt either. Thus having devoted his retirement entirely to playing golf and to sport fishing, I became fortunate to have had numerous invitations for both activities; at both of his homes.

As he sat down in the notorious chair to start our office visit, he slowly and almost imperceptibly seemed to be sinking out of view. Yet he had kept the conversation going as though nothing was wrong. Finally the chair gave out again, as the fat woman had rendered the chairs useless by destroying the tensile strength of the metal; the result being Dudley too hitting the floor with a resounding thud.

Being a little easier to remove from the collapsed chair frame than the obese woman had been, when he got straightened up, I explained what had happened in very embarrassed apologetic terms. But he brushed it all off by telling me he thought the whole incident had been his own fault.

Having just come over from a two-martini lunch, and as he slowly sunk down in the chair, he said he simultaneously watched me disappear over the horizon of my desk as though my face appeared to wane like the setting sun going over the yard-arm. As he sank, he was thinking he might be inebriated; was having a delayed vertiginous reaction from the booze; and was too embarrassed about it to say anything. 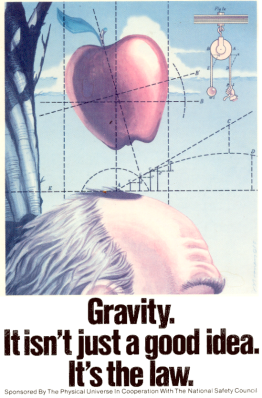 For every personal satisfaction, there is an unknown and variable consequence.