In 1962, when I was about fourteen years old, my parents decided to take us on a trip to see America. We had already been upstate to Niagara Falls and the Howe Caverns, but these were short practice versions of what was to become a greater, more comprehensive cultural quest to experience the natural splendor of America.

To defray the cost my parents rented our summer place to pay for a trip that was being billed as “a once in a lifetime opportunity.”

My father also said something to the effect of doing it because Dr. Spock had written something about the value of a trip like this ensuring indelible personal memories conjoined with high levels of family bonding. It was also planned to be an all inclusive great family adventure in which we would pick up my Aunt Polly and Cousin Byron in Virginia, travel South through Texas to visit Grannie and Granddad Cooper, and then head out West to eventually wind it all up in California.

At the time we had a Ford Mercury station wagon with amenities that included super modern push button gears but unfortunately not including air conditioning. Theory might be good in the abstract, but if Dr. Spock ever had to travel 3000 miles, through the sun baked South in a rattletrap Ford with three adults and four children between the ages of 6 to fourteen, I am sure he would have revised some of his thoughts on permanently bonding a family by having them travel together. Or if nothing else he might have added at least that air conditioning might have a beneficial effect on the collective mood of the car’s occupants; instead of all of us becoming permanently un-glued.

After staying in Richmond and then in Houston for several days the obligatory visit portion of the trip was over and the exciting sightseeing part was about to begin. By that time Byron, my brother, and me were so “carsick” we had run out of songs to sing or games to play.

Necessity being the mother of invention resulted in the creation of a new game in which we periodically made my sister disappear. We would hocus-pocus her into oblivion and then ignore her cries and pleas that she was actually still there. She would repeatedly scream “I’m still here”, which malevolently made us ignore her all the more. Then we sat on top of her while remarking that we could not figure out why that part of the seat was so lumpy. Then every once in a while; we would just bring her back. Shazaam!

She was so disturbed by the whole thing she just cried and begged my mother to acknowledge her plight, and her actual existence, but my father and Aunt ignored it entirely. All my mother would say was:

This was not the validation my sister was looking for as it still left us in control of her reappearance, and to this day she claims the episode has permanently scarred her psyche. Maternal abandonment syndrome, I guess.

As we traveled through the Panhandle of Texas the weather was so ferociously hot that the car was stifling even with all the windows rolled down. So my mother and Aunt came up with the brilliant idea of air conditioning the vehicle by getting a pan, putting some ice in it, leaving it on the front floor, and then directed the vents to blow over the top of it it. All we got out of that was a pan full of cool water slopping all over the car floor.

At one roadside stand the hornets were so large and so aggressive, I thought they were humming birds; and gladly abandoned my sandwiches to them. They practically carried them off by the halves looking more like Osprey’s snatching fish than simple bees.

As we got closer to Arizona we drove into a severe weather system, which hit us with blistering horizontal rain, just in time for the windshield wipers to break down.Undaunted, my father got some string which he hooked onto each wiper blade, then leaned out the window as he drove while pulling the wipers on his side and Aunt Polly doing the same on hers in contra lateral uncoordinated yanks. This simply resulted in the strings breaking as buckets of water poured into the car. No one could see the road. But on we went barreling along the old two-lane highway.

You see, we had a schedule to keep and did not want to risk the motel giving the rooms away if we arrived late, even if we had to plow headfirst into chrome plated Freight Liner coming down the opposite lane .

My consistently favorite part of the trip was our daily arrival at a Best Western Motel, immediately diving into the swimming pool, remaining there until my skin became corrugated, go to sleep in something other than a car seat, and then waking up the next day to the intoxicating smell of pancake syrup coming from the motel’s little diner.

By the time we got to the Grand Canyon we were travel weary, listless and could care less about seeing this fabulous wonder. I further ruined it all by refusing to go on the mule trip to the bottom because I was equally afraid of horses as I was of vertical cliff drops. If Uncle Bobby could never get me mounted on a horse, there was no way my father; mother or aunt could ever come close to making me a Burro buckaroo.

My parents kept remarking how beautiful the colors were or how they changed with the arc of the sun, but the whole thing was lost on the children.

As it turned out we had plenty of additional time for gazing at the scenery because the push-button automatic transmission on the car got frozen in “Forward” with the car’s front end being up against the curb in a vertical parking space. This meant that the only way out would be to drive straight ahead into the canyon.

A mechanic, who seemed as though he had just dropped in for a visit from Mars, would be installing the replacement part that had to be delivered from Flagstaff on a nebulous timeline. His attitude about our predicament was indifferent at best, seemingly irritated at actually having to help us and was probably due in part to some part of his cerebral cortex being pickled by an overexposure to tourists, or car fumes or effects similar to my mother’s excessive hair dying or drying, being chronically baked by the insufferable dry dessert heat. He could have cared less how long it would take to get us going again by making it clear that the more my father bugged him, the longer it would take him to do the job.

In the meantime, while we waited several days for the part to come, we discovered we could push the car backward out of any vertical space we could find and still make short forays, as long as we only went forward. Having lost “Reverse” made parallel parking an impossible maneuver and made the exercise of constantly prowling for any potential vacant vertical parking slots somehow detract from the real objective of the sight seeing trip. The scenario of an entire family pushing a car backwards undoubtedly added to the flavor of other tourist’s enjoyment of the Old West, like watching stranded pioneers moving a horseless Conestoga wagon after the pack animals dehydrated and bit the dust.

The car eventually got repaired. And then we did “The Tour.”

We saw a Ghost Town, an animal park, a Wild West movie set, the great Arizona meteor crater, the Petrified Forest, iconic Native American dancers, and of course the ancillary retinue of caged tarantulas, scorpions and rattlesnakes. It was completely exhausting; while at the same time the clustered little road side traps had just a little too much of the phony, yet enterprising “rip off the tourist” ring to them, and became my first real exposure to P.T Barnum like promises not delivered by advertising.

Since I already had a passion for dinosaurs or anything else prehistoric, the only thing of real interest to me was the Petrified Forrest. It was the first time I had seen anything fossilized and even at the age of twelve began to wonder why it had happened only at that particular place on earth or only at that particularly very remote historical point in time. Its unique peculiarity planted in my mind a curiosity about evolutionary science that has plagued my adult years with an obsession about the history of the Universe and our planet’s place in the overall scheme of things.

Eventually we wended our way to Zion National Park.

To the children this was just another boring canyon. All we focused on was to laughingly make fun of the man on our hiking tour that was continuously passing wind as we all marched along behind him. He gave brand new meaning to the sniggering vulgarity we already referred to as “trail farts,” but he seemed oblivious and completely impervious to his own staccato methane eruptions as he bubbled along. Giggling and laughing as we toured the trails by marching right behind him to vicariously hear the noise, we completely ignored the scenery, and forever after, making him as a mental postcard, referred to him as “The Tail Blazer.”

My father doggedly pushed onward until we finally reached yet another spectacular park, The Bryce National, but once again the beauty of America had simply escaped the appreciation of the children who were just too young to see it for what it is. To us it was just another rock-piled, craggy park.

Bored out of our minds, we sat down by the edge of the park road and started throwing peanuts to the chipmunks.That was when my father had his nervous breakdown. He started screaming about how ungrateful we were, how this was such a wonderful opportunity that few children had the privilege to have, and that if he knew we were going to feed the chipmunks instead of looking at the park he would have given us all the peanuts we wanted and left us in our backyard at home with the local indigenous rodents of New York State.

And that was it. We were going home. The trip was over. We were not going to California. There would be no epiphany in “The Golden State.” He just rounded us up, turned the car around and made a mad dash for the East Coast without stopping to see anything else.

By that time my father was probably thinking it would have been more fun to stay home to play golf with my obnoxious bi-polar Uncle Jimmy or even go out to dinner with him again and suffer his embarrassing brow beating of the restaurant wait staffs.

But the worst was yet to come because when we got back to our summerhouse, the tenants had done so much interior damage that the walls had to be completely spackled and repainted. So that was the end of summer rentals, too.

My father said he would never ever take us on a road trip again and that we would just have to spend the rest of our summers at the house by the beach.

So, Dr. Spock be damned; that was some hell of a punishment all right. 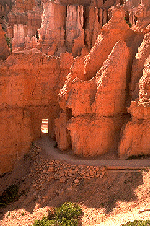 Bryce Canyon: The end of the road

To everything: Turn, turn, turn

There is a season: Turn, turn, turn

And a time for every purpose