The Catholic Church is very high on the concept of free will as rooted in the Adam and Eve debacle in the Garden of Eden. Man can choose between good and evil, right and wrong, or better and worse. God put us here to experience a lifetime  of mixed joy, happiness, pain and suffering as we run around every day of our lives making numerous moral and ethical decisions, simply because our first father and mother could not keep their hands off a miserable apple.

When I was a child I used to wonder why apples were so plentifully accessible if they were at the same time so forbidden. Perhaps instead God should have dangled a carrot in front of Eve before he subsequently beat her with a stick. Or was eating the apple a parabolic vignette about virginity and innocence, meaning when you have it you guard it with your life, until you give it up to some devil, and then it doesn’t matter anymore, as it becomes anticlimactic hollow pith. The only difference being that once you pick that apple, you can never again put it back on the tree. Innocence becomes automatically tested, and jaded as life progresses; to the point that its loss becomes fairly apparent.

Virginity, however, is something both genders can always lie about; or at least successfully fake to some extent. Men can just deny having had any prior sexual experiences; and if you really want to be a purist, a woman can have a hymen surgically reconstructed; as many times as she might want to have it done.

In catechetical instruction, I asked the priest if we actually choose to be born, and if so, do we also choose our parents. He could not answer that question. In fact he could not answer many questions; except to let me know without doubt that my dead dog could not be admitted to heaven. When I asked him to clarify that he told me I would have to take it as an article of faith. The great thing about religion is that any unexplainable concept simply becomes an “article” or “mystery” of faith. Because the Church requires so many great leaps of faith, for the true believer it should probably supply every Catholic household with a trampoline.

I doubt very much that I chose my parents or that they even chose me. I believe rather that DNA combinations are random events with random outcomes; but at the same time retain a repository of automatic front loaded programming. Dropping that blob of DNA into a maelstrom of legacies makes for even more in the way of unpredictable outcomes. This is similar to starting a steam locomotive engine in a cornfield; then letting it run amok without tracks. You still end up with a maze but not the neatly furrowed acreage you had on your drawing board.

Personal choice for me was highly unlikely for another reason. With the inherent difficulties of having only one mother, it would be extremely doubtful I would have been crazy enough to choose the collective persona of the Four Sisters of the Apocalypse to be my multi-mega-mother.

What I definitely know for certain is that I did not choose the date, the time nor the season to emerge from the womb. Yet it was against this backdrop of pseudo stability, genetically diverse legacies, and probably not by my freedom of choice that I came into this cold, cruel world. If I had to do it over again, I would have stayed put, remaining only a solitary sub-atomic twinkle in the eye of the great universe at large, instead of becoming binary seminal twinkles in the eyes of both my parents. 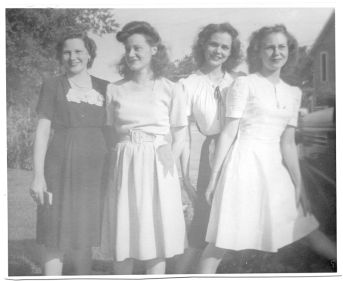 And it’s up against the wall

Mothers who have raised a son so well.

And drinkin’ in a honky-tonk.